On Wednesday the 10th of April 2019 at 11h28 the Peninsula Wilderness Search And Rescue (WSAR) was activated after the Cape Medical Response (CMR) private ambulance service reported that a dog had become stuck under a rock near Murdoch Valley between Simonstown and Cape Point in the Table Mountain National Park.

Our Rescue Mountaineers were placed on standby while a team from CMR had responded. It was learnt that the casualty was trapped close to the beach near the Boulders Penguin Colony. Multiple services including the City of Cape Town Fire and Rescue, CMR, NSRI Simonstown, Cape of Good Hope SPCA and TEARS Animal Rescue responded to where the medium sized dog had become stuck under a huge rock after chasing a dassie. Using a “ceiling hook” to snatch his collar, the K9 named Simon was freed from the three meter deep crevice by a CoCT Fire and Rescue crewman. 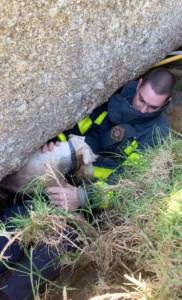 After it was confirmed that WSAR was not required, our teams were stood down. Simon the K9 had reportedly emerged uninjured and in good spirits after his ordeal.

On Wednesday the 10th of April 2019 the Winelands Wildernes Search And Rescue (WSAR) was activated after a caller reported that a group of hikers were overdue after walking to the Crystal Pools section in the restricted Steenbras River Gorge south of Gordons Bay off the coast of False Bay.

It was learnt that the party of 3 adults (2 males, 1 female) and 1 female child had fled up into the gorge after being harassed by a some baboons. While WSAR Rescue Mountaineers and Logistical support crew were placed on a precautionary standby, conservation rangers from the City of Cape Town drove to the head of the gorge and hiked downwards with the aim of locating the stricken hiking party.

After a while, the rangers located the hikers who confirmed that they were uninjured. The party of four were then assisted and safely escorted out of the gorge near the river mouth at Clarence Drive coastal road.