On Monday the 18th of February 2019 at 08h51 the Peninsula Wilderness Search And Rescue (WSAR) was called to assist a 50 year old local female hiker who had reportedly suffered a leg injury while walking in Newlands Forest below the Contour Path.

Crews from Metro Rescue as well as  the SANParks Visitor Safety Patrol unit responded to the Newlands Wildfire Station to prepare for an evacuation of the patient. Teams in a 4×4 and an All Terrain Rescue Vehicle (ATRV) drove to where the patient and her party had been waiting. The Rescue Medics had confirmed that the lady had badly injured her ankle and proceeded to treat and  immobilise her leg and foot. She was then loaded onto the ATRV and driven down to the Wildfire Station where she was handed over to an awaiting ambulance that transported her to a medical facility for further treatment.

We wish the lady a speedy recovery.

On Monday the 18th of February 2019 at 17h22 the Peninsula WSAR was activated after receiving a call from a member of the public who had heard someone shouting for assistance from the area above their house in Camps Bay.

The Metro Rescue Mobile Incident Command Vehicle and crew, together with Logistical operators, Rescue Mountaineers and SANParks Visitor Safety Patrollers were asked to respond to a location where the urban edge interfaces with the Table Mountain National Park (TMNP). The initial search area was plotted to be the section of the TMNP below the Pipe Track and above the residential line.

The calls for help could have been from a mugging victim or that of a person who had suffered as a result of a more serious crime, so extra urgency was factored into this response. An extensive search of the area was conducted with the assistance of the local Neighbourhood Watch and other agencies. There was a very stiff South Easterly wind blowing at the time, and it was later learnt that the sounds of the distress calls were being carried down to the urban area, from a different location much higher up the slope. The cries for help were reliably placed to be emanating from a steep section of the mountain, just below the Upper Cable Station. 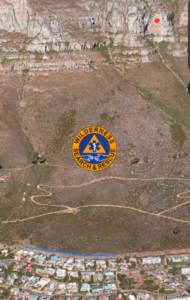 The fading light as well as the strong wind had ruled out a helicopter rescue. It was then apparent that a very technical rope rescue operation was required. Using an international cellphone number it was confirmed that the person in distress was a 32 year old male visitor from Iceland. He was able to guide a search team in a 4×4 along a jeep track to a position directly below him. 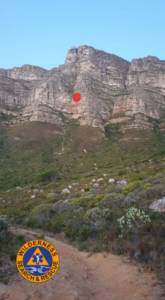 Our Rescue Climbers were asked to respond to the Lower Cable Station, where the Table Mountain Aerial Cableway company (TMAC) had agreed to make just one attempt to send up a car, since the wind had already exceeded their normal operational conditions. By 20h38 a Rapid Response team had docked at the Upper Cable Station from where they began to make multiple abseils towards the patient. By this time the daylight had completely faded and it was then that the rescuers could actually pinpoint the position of the gentleman when he used the light of his cellphone to create a visual reference. 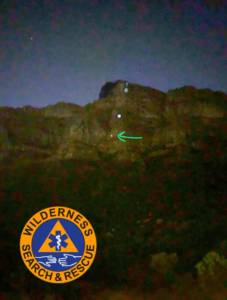 A second rescue team ascended via the India Venster route, while members who happened to be training close by also made their way to a point above the stranded hiker. By 01h48 the first Rescue Climber had reached the patient, and after an initial assessment he was secured into a harness and lowered down to the base of Cairn Buttress from where he was assisted to walk down to the waiting vehicles by four rescuers. 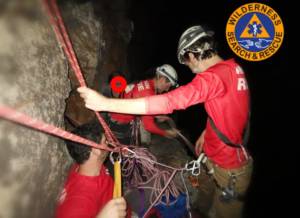 The rest of the rescue team took the remaining equipment and ropes, retraced their access route to Kloof Corner Ridge and then down the India Venster route to end up at the Lower Cable Station at about 04h30 this morning.

This gentleman can count himself extremely lucky.

At 06h44 after the debrief this morning, and after all the rescuers and equipment was accounted for,  the official stand down was declared.

WSAR would like to commend the experienced Rescue Climbers who had to negotiate very dangerous and unstable terrain, steep drop offs, sheer cliff faces and the danger of rock falls in the dark. They had to abseil about 300 meters over multiple stages in order to reach and recover the hiker.

We wish the gentleman a speedy recovery from his ordeal.