The Wilderness Search And Rescue was activated at 10h21 on Saturday the 22nd of February 2020 when a caller reported that a party consisting of three locals were unable to proceed any further after finding themselves disorientated as the cloud cover engulfed the top of Table Mountain. The stricken party had reportedly commenced their hike at 04h30, and six hours later they requested assistance.

A rough position of the local hikers, two males and one female was made using pictures that they were asked to take and forward to the Incident Commander. An Incident Command Post (ICP) was set up at the Lower Cable Station (LCS) on Tafelberg road. From here the first team made their way up the mountain via the Cable Car in order to locate the party which was stuck off path, on the western side of Table Mountain. After abseiling down a distance voice contact was made between the rescuers and the party. Since the rescuers were not close enough, a second team was dispatched to abseil down, from a point which was closer above the location of the three hikers. At this point, the weather deteriorated with a decrease in visibility, a drop in temperature as well rain moving in. The wet conditions, the possibility of hypothermia and the concern of falling rocks were some of the hazards that were faced by both the stranded hikers as well as the rescue party. Due to these testing conditions a safe extraction by helicopter was also ruled out.

The second team began securing anchor points at a new position, and when they managed to obtain voice contact with the hikers, it was learnt that much longer rope and hauling systems were required. A third team was then dispatched to carry additional technical equipment to the point at which the hauling system was being set up.

As a result of the extreme conditions and the fact that the Cable Way and Rescue helicopter could not be used, it was apparent that the rescue effort was going to be quite an extended one. This lasted through the night and at 06h45 on Sunday morning the three hikers and more than 20 rescuers were safely off the mountain. 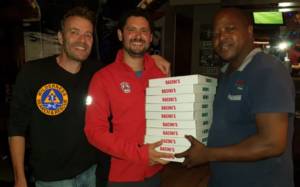 WSAR urges the public and tourists to please:-