At 10h04 on Sunday the 26th of January 2020 the Peninsula Wilderness Search And Rescue (WSAR) was activated after a caller reported that a hiker had taken a fall near the chains and staples section on Lion’s Head.

The first responders who assembled at the start of the trail on Signal Hill road comprised a hasty team which included a Medical Rescue Technician. The team reached the patient after walking for about twenty minutes. On arrival it was discovered that a 21 year old local female had sustained injuries to her head and arm. Efforts to stabalise the patient commenced while waiting for the arrival of the Helicopter Emergency Medical Service (HEMS). Rescue mountaineers, logistical support and other crew were stationed along Signal Hill road to manage the traffic and secure a temporary emergency Landing Zone (LZ).

After the casualty was hoisted into the HEMS she was delivered to the temporary LZ where she was placed in the care of a road ambulance team who transferred her to a medical facility for further treatment.

We wish the lady a speedy recovery.

At 15h03 on Sunday the 26th of January 2020 the Peninsula Wilderness Search And Rescue (WSAR) was activated after it was reported that a person ended up at a section below Chapman’s Peak drive at the main viewsite.

NSRI Rescue boats from Station 8 Hout Bay and Station 26 Kommetjie responded to the area below the viewsite in order to offer support and assistance. (In some instances, the crews are inserted from the seaside. This may also include the retrieval of casualties as well).

The Rescue Helicopter, High Angle Rescue Climbers, logistical support crew, NSRI and SAPS were among the services who responded to a point above where the person came to rest on the steep slope. The local male was located by the helicopter crew, where he could be seen lying in a precarious position. After Medical Rescue Technicians reached the location on the mountain slope, the gentleman was unfortunately declared deceased on the scene.

His body was extracted by means of a stretcher as well as the use of complex rope and hauling systems which were set up and managed from the road. Rescue vehicles were used as anchor points for the rope systems. 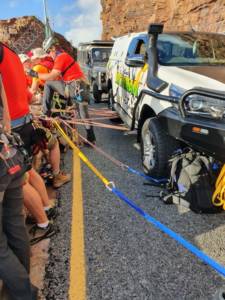 Once the body was  recovered to the road, it was handed to the Western Cape Department of Health Forensic Pathology Services (FPS). The operation was concluded after dark.

WSAR would like to express sincere condolences to the family and friends of the deceased.

WSAR urges the public and tourists to please:-